It can be difficult to motivate Ryan to do tasks that he is uninterested in or doesn’t see the purpose of. Sometimes he can be motivated with a reward such as computer time or ‘down time’.

Although his verbal responses are very good he finds writing very difficult and needs a lot of time to finish work as the process of thinking about what he wants to write, sending the correct message from brain, down arm to hand and then formulating correct letter pattern with pen gets very muddled and confusing.  It can also take Ryan some time to respond to a question or statement which can come across as though he is ignoring you, or daydreaming, when in fact he is taking time to process what has been said/asked of him and to formulate a response.

Ryan has quite a sense of humour but doesn’t always respond as you might expect. Things he says, does or writes which we don’t generally find amusing he might or vice versa (see previous post on neologisms).  He can use humour at inappropriate times or out of context which can cause confusion or unintended upset.

He also has some sensitivity to noise, lights and smells. He may try to cover his eyes or ears as an indication to this stress.  Once you get to know him there are indications to his building stress levels and he best removed for a time out or allowed to work in a quite area before the situation becomes unmanageable as Ryan still doesn’t always recognise the signs himself.
When he does become increasingly frustrated and/or angry he can shout out, be confrontational or swear. 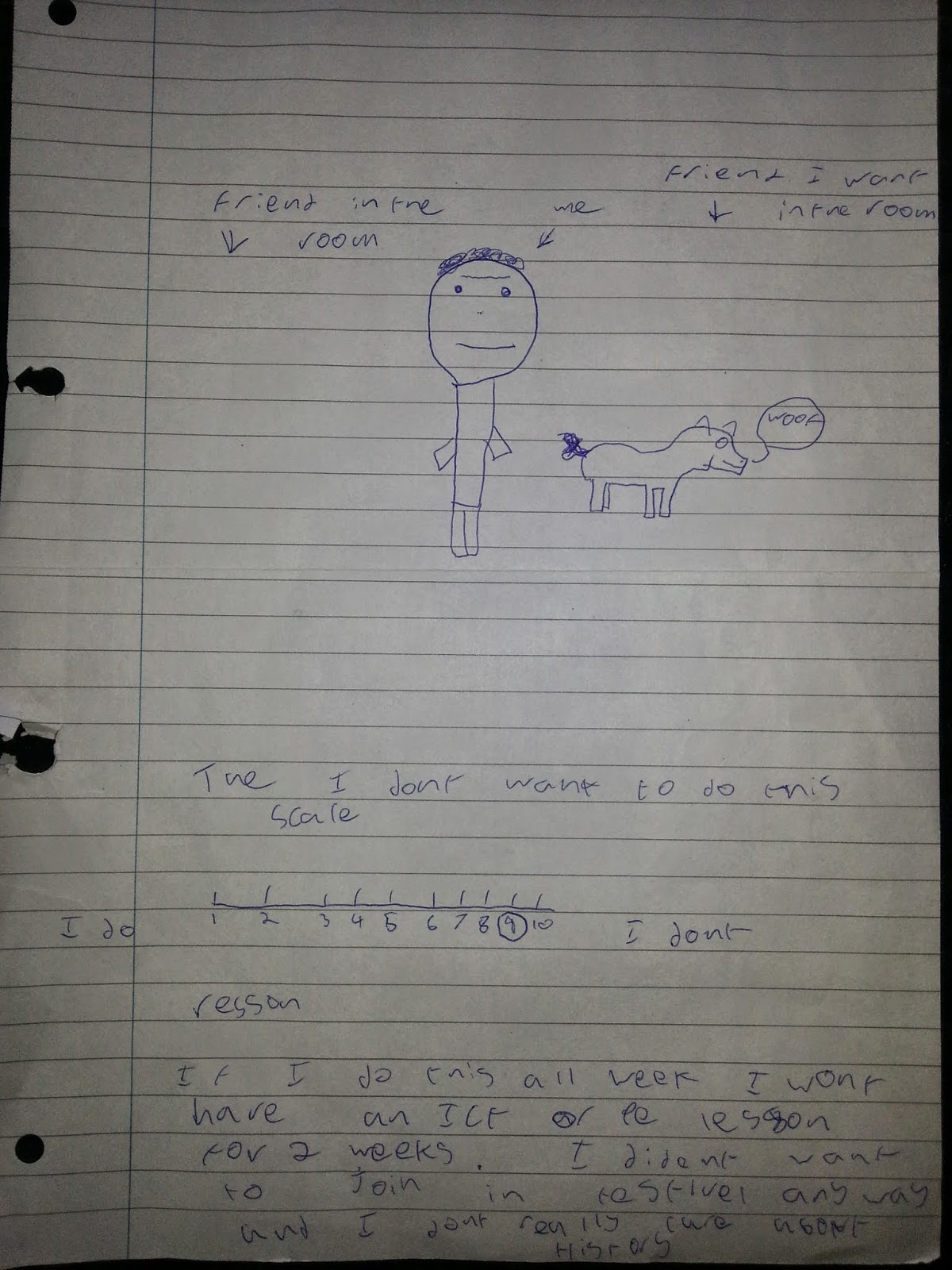 All of this has become much more manageable as Ryan has settled into secondary school life and has excellent support, however it is still a rumble to be aware of and which came to light, not unsurprisingly at exam time during his first year in secondary school, year 7.

He has not had to sit exams before and it was an exceptionally stressful time for him. Fortunately he (along with several other children) were given the opportunity to sit their exams in a quite class room where there were experienced staff to read and scribe (depending on need). The pupils in this class were also permitted 25% extra time due to the differing needs they had.
Unfortunately the stress was still too much and he wrote some inappropriate answers and even completely ignored sections, some of which were the big mark questions where he was required to write more detailed answers.

I am not going to worry too much at this stage in his education and put it down to a learning curve where I need to better prepare him and try to arrange with his school if in future he may be able to use a scribe for sections of the exam.
We have another couple of years before the exams become really formal external GCSE based. 2 years of ‘training’, preparing, practice and hopefully more maturing.

All that said we have received his first full, end of year report and it completely blew us away. Okay his exams result were not as high scoring as we had expected or hoped and know that he is capable of, but his effort and attainment grades were excellent. He got: 3 As, 5 Bs & 5 Cs.

How could anyone possibly be upset with that. We are so proud and it just goes to show, exams are not everything. So much focus is put on to them, by the education system and governments but some children just will not shine or show their capability through this particular medium. Remember the whole picture, the whole package. Specks of talent could lay anywhere, anyplace. Find it, nurture it.
Email ThisBlogThis!Share to TwitterShare to FacebookShare to Pinterest
Labels: ASD, Aspergers, exams, reports, school, stress