Each morning we are born again. What we do today is what matters most. – Buddha.

Continuing on with our newly blessed peace and tranquillity Ryan and I went to stay with my parents for a couple of days during the Easter school break.  On our first night there Ryan and I settled down to watch Big Hero 6 as he had been nagging me for a while to watch it with him. I had no idea what this movie was but was just happy to spend some quality time with him particularly as he was inviting in to his world, his space. We were a short way through the movie when we both happened to notice a brightly flickering star or planet outside the window. It was mesmorisingly changing colours from red to blue to green.  I knew that my father has a wonderful set of binoculars permantly set up on a tripod for mum to watch her birds or for an occasional bit of star gazing. While I went to get them set up in the garden, Ryan hastily downloaded a star map onto his smartphone and we were quickly able to identify the wonder as Sirius.  Ryan quickly became enthralled and began googling the Star on his laptop, delighting then in telling me all the facts he had discovered. We soon forgot the movie and spent an awesome evening star gazing. Hobby #1

Now as you know from our previous blog post ‘Photograblog’ Ryan has a very keen interest in photography and is surprisingly good for a self taught teenage boy.  All his previous pictures have been taken simply on a Samsung Galaxy Note smartphone/phablet, but he has been having increasing problems with the basic machine and even more basic camera so hasn’t taken any photos for many months. He has been saving his pocket money and at the end of the Easter Break purchased himself a new Sony 21mp, 35x optical zoom digital camera. It was an awesome deal and he has re-immersed himself into his world of photography with a vengeance which is wonderful to see and a new digi-photograblog will be published soon. Hobby #2 (re-born).

I went to visit my sister in Birmingham just before the new school term began at the end of the Easter break and pleasantly discovered that she had a new corn snake in her ever growing collection of animals. She has owned her original corn snake for 15 years and recently agreed to take on a rescued corn from her local vet who knew she had one already. She has very  kindly gifted the rescue snake and full vivarium set up to Ryan as yet another new hobby and a way to get him off his computer obsession, the only other hobby he has had up to this point. It is a hobby that I too can enjoy with him as I have no interest in computers and gaming but love snakes. She is the most amazing sister I know. 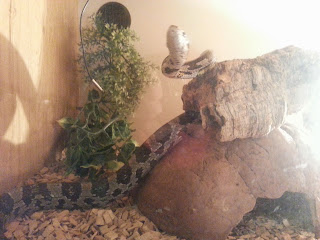