I haven't posted for almost 3 months and that is shameful, for which I am sorry. The reasons for my marked absence are due to work and my university degree taking up the majority of my time. In fact I should be writing an essay right now, but am procrastinating instead. I have also been caring for two very poorly family members one of which has been Ryan.

I mentioned way back in April that Ryan was first diagnosed with Glandular Fever in February of this year. He missed a large chunk of the Spring term as a result but went back to school after Easter. Unfortunately the illness hadn't completely cleared and hit with a vengeance once again during June resulting in Ryan only attending school for a total of 5 days during the rest of the school year, summer term. This is why I haven't posted anything further. He has been incredibly poorly, he certainly never does things by half. I don't know if his appallingly weak immune system has any link to the fact that he is Autistic. Maybe that could be a discussion topic, as I would be very interested in hearing other people's experiences and views on the matter.  I wrote about Ryan's many illnesses in June 2014 which can be re-capped here.

Considering the amount of time Ryan has missed from school this academic year he managed to achieve an excellent set of exam results and report. I think he just about managed to hold himself together to get through his exams as it was the following week that he then became ill again. Coincidence? He achieved 2 As, 5 Bs, and 4 Cs. This is outstanding for a boy that missed nearly three years of primary education, was expelled and then needed to attend part time as a result of moving to a new school. What a difference to last year's attempt in year 7.

I know that the effort has come from Ryan maturing and settling in well at secondary school, but I also know that he has received phenomenal support from the school, especially his TA and HLTA (Teaching assistant and Higher level teaching assistant). They have both been rocks of support to Ryan and myself.

To add to the busyness also of the last few months we decided as a family (I got my own way) to introduce yet another family member to the growing Skilton clan, of the most gorgeous Beagle puppy named Neo. We homed him on 21 June and he was four months old on 18 August. The household now consists of Matriarch, Patriarch, two grumpy teens, 3 dogs, 1 cat and 1 snake. Never a dull moment, or quiet. It is a good job we are detached and remote. 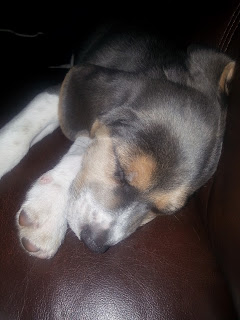 Here is hoping Year 9 in school brings Ryan better health, as the stress of school, once again beginning to build as he has to choose his options for his GCSEs. So much pressure on such young minds.  He has asked if he could begin Violin lessons in September through school which I think is an awesome idea so watch this space and I will endeavour to post a bit more regularly with updates on his progress.