It's a bit of a mouth full but this is Ryan's official diagnosis. It is a rare lymphoma, but extremely rare in children. It is extranodal in his tonsillar area at the back of his mouth in the oropharynx or Waldeyer's ring. Caused by the Epstein Barr Virus that usually creates Glandular Fever.

I have shared my full story on several chat forms in the hope that there is someone with the same that I can connect with for support. Of course, I do not wish this on anyone, however, if there is someone else going through, or has been through the same I would like to connect with them.
Thank you to everyone that has shared messages with me so far. I really appreciate the help and advice you have given me. I wish each and every one of you all the best with your own battles. 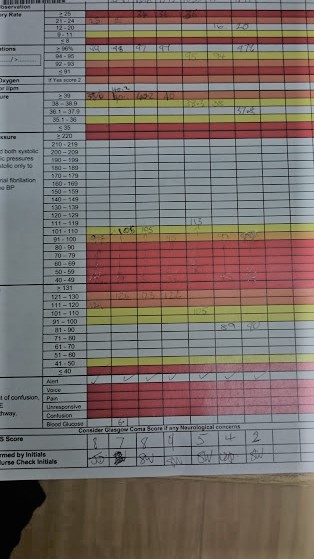 Ryan had a percutaneous endoscopic gastrostomy (PEG) tube fitted on Monday 3rd October 2016, with Radiotherapy (RT) due to start on Tuesday 4th. On Tuesday morning I spoke with the doctors as I was concerned that Ryan wasn't well enough after the op to start RT, but everyone assured me he was medically fit enough and the emotions he was displaying were nerves for the RT starting. It took 4 nurses and his youth worker two and half hours to coax him through the first fraction as he was in so much distress.
On Tuesday night he began vomiting and I rang the nurse at Velindre Cancer Centre on Wednesday morning concerned again that he wasn't well enough for RT. She said she would assess him when we arrived for our second session. By the time we got to her on Wednesday afternoon Ryan's temp had reached 40.2C and she red flagged sepsis. All hell broke loose and Ryan had 12 medical professionals around his bedside at Velindre while they stabilised him and got an ambulance to transfer him to the Teenage Cancer Trust (TCT) unit in Cardiff. I cannot ever thank Velindre enough for acting so quickly and saving his life.
We then spent 10 days in the TCT unit as Ry improved slowly. His CRP reached an impressive 332 on Thursday 6th October. His BP and Temp have finally stabilised although his Hb, Potassium and Creatinine are a little low. His Lymphocytes are almost non-existent but everything else bloods wise is all ok.
So in all, he only had 1 fraction of RT on Tuesday 4th October, with a ten-day break and he was then taken by ambulance over to Velindre and then brought back to TCT for his initial week of RT sessions while he continued to recover from the sepsis.

Another unplanned diversion as we just ride this latest bump through the ever winding Lymphoma road and little did we know the complications and ultimately life-threatening situation the blasted PEG would place Ryan in, within a month of having it fitted.
Email ThisBlogThis!Share to TwitterShare to FacebookShare to Pinterest
Labels: Cancer, chat forums, diagnosis, EBV, Epstein Barr, hero, lymphoma, NK/T cell, non-hodgkin, oropharynx, PEG, radiotherapy, Sepsis, Teenage Cancer Trust, Velindre