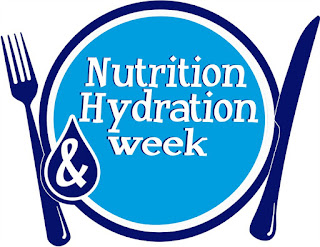 To coincide with national Nutrition and Hydration week, I thought it would good to share with you Ryan’s experience of malnutrition as a result of his lymphoma diagnosis.

Malnutrition is a common problem among patients with cancer, affecting up to 85% of patients with certain cancers. In severe cases, malnutrition can progress to cachexia, a specific form of malnutrition characterised by loss of lean body mass, muscle wasting, and impaired immune, physical and mental function.
Cancer cachexia is also associated with poor response to therapy, increased susceptibility to treatment-related adverse events, as well as poor outcome and quality of life. Cancer cachexia is a complex, multifactorial syndrome, which is thought to result from the actions of both host and tumour derived factors, including cytokines involved in a systemic inflammatory response to a tumour.

When Ryan became ill in February 2016 he weighed 53kg. I chased the GP for an ENT referral in May 2016 by this point Ry's weight had dropped to 49kg. We didn't see ENT until July when they discovered a tumour by which point Ryan’s weight was now 46kg and by formal diagnosis, at end of Aug he had reached his lowest weight of 42kg. So in total had lost over 10kg from Feb to diagnosis in Aug. The haematology consultant was quite concerned that Ryan's malnutrition by the time of diagnosis was going to make the fight even harder for us. Ry was not well enough, strong enough, or nutritionally able to begin Chemotherapy so the decision was made to fit him with a Nasal Gastric NG feeding tube, Ryan then went on to have a PEG, but this almost killed him with sepsis and peritonitis, undoing the small amount of success we had managed with the NG.

The surgeon that performed the emergency laparotomy was brutally honest with me in those early hours, he had never operated on a child with such low muscle mass due to malnutrition and he was very doubtful that the sutures from the operation would hold. The next 48 hours were critical. Either Ryan would make it or he wouldn't. He was doubtful.

Ryan defied the odds, made a full recovery and finally had a Mic-Key gastrostomy operation which, finally, was a success and Ryan quickly gained weight to 50.4kg. He still had a long way to go to get to the ultimate goal of 60kg but finally heading in the right direction.

Nutrition is critical for any growing child and for any adult to remain healthy. For Ryan it was a double edged sword. He was physically unable to eat due to the growing tumour in his throat, (that we knew nothing about) and the growing cancer was consuming inordinate amounts of calories and feeding off the little nutrients he had to grow. It really was a Catch 22.

Fast forward to March 2018. Ryan is not longer gastrostomy fed. He is eating normally again and weighs an acceptable 64kg. I would like to see this figure nearer 70kg, but as he fights cancer for the 2nd time we are back to that cycle of needed to consume extra calories due to the lymphoma, but not feeling up to eating due to the side effects. The battle continues.
Email ThisBlogThis!Share to TwitterShare to FacebookShare to Pinterest
Labels: cachexia, Cancer, hydration, lymphoma, malnutrition, nutrition