Ryan awoke on Monday 11th September and told me he had an ulcer. As soon as he showed me I knew it was not an ulcer, I knew his lymphoma is back. We had an appointment with his oncologist at clinic the following day. The consultant agreed it needed a biopsy. He photographed and emailed our oncology team in Cardiff from the treatment room in Carmarthen hospital. Dr A also advised me that my dentist see the oral mass as it was my dentist that noticed the original changes last year.

My dentist was thankful we had been to see him to keep him in the loop and agreed it was looking pretty awful. We were admitted to Cardiff hospital on the Wednesday for biopsy on the Thursday. Our oncology team were open and honest that it was their belief Ryan had relapsed but obviously we had to wait for the biopsy results to confirm the diagnosis. We were initially advised that we would be discharged on watch and wait and that it would be 7 to 10 days to get results. I knew it was a relapse, the Drs knew too. Even though I knew deep down, the juggling of emotions when Ry had only been in remission for three and a half months took its toll.

Ryan’s biopsy was to be done at the Heath Dental Hospital by the maxillofacial surgeons due to the mass being on his lip and inner cheek. When we arrived at the ward the nurse informed us the doctor had been called away to an emergency, she was very sorry but would we mind waiting. Ryan being his usual dark humored self replied “Not at all, if we wait long enough I'll be dead and you don't need to bother with a biopsy.” Bless the nurse, she had never met Ryan and didn't know what to do with herself, so we all had a giggle.

The biopsy was straightforward enough. Ryan was in a ordinary dentist’s chair, had a local anesthetic to the area just as you would for a dental appointment. They took a small section for biopsy. When we got back to the TCT unit the doctor was already calling pathology to ensure the sample had been delivered but it had not. The doctor was a little panicked and stressed; how could the sample get lost between the dental hospital and the pathology lab. Ryan again quick off the mark pipes up “Don't worry if the sample has been lost, leave it a couple of days and I'll grow you another one.”

Of course the sample was received at pathology and it was now a waiting game for the results. Another long arduous road ahead. 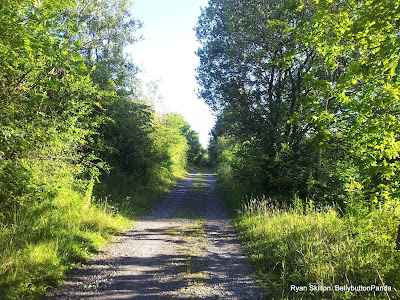 It was a stressful weekend and on the following Monday afternoon, a week after Ryan had originally noticed the oral mass, the haematology team from Cardiff Hospital rang us with the confirmation of relapse. We were admitted that day to the TCT ward to begin the process of PET scans and treatment protocols. The PET scan had to be delayed a day as Ryan's bloods were not satisfactory for him to safely go through the PET scan. He had instead, an IV drip for 24 hours  to balance the high urate in his blood.

The following day he was well enough to be scanned and unfortunately the results showed the Ryan has several new lymphoma tumor pockets throughout his body. This came is quite a shock as you can imagine. We thought we had caught it early and in fact he was in a worse state than the original diagnosis a year ago. There was then a further agonising 24 hour wait to achieve confirmation of funding approval for a new revolutionary immunotherapy treatment called Pembrolizumab.

Our haematology consultant Dr C who is always open and honest with us in front of Ryan confirmed that if we did not receive funding he was talking weeks not months, which as you can imagine broke me that day. Funding was approved and treatment began Friday 22nd September which consists of a 30-minute IV drip given as a day patient every 3 weeks in Cardiff over the next two years with weekly monitoring in Carmarthen Hospital. 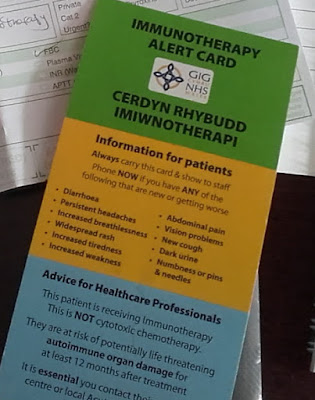 Is an artificially made antibody which attaches itself to the cancer cells and stops them from growing. It is not the same as chemotherapy. Side effects are different, but not as toxic as chemo. Ryan will be monitored closely with regular liver, kidney and thyroid tests to ensure no damage from the treatment.

Fortunately, day patient treatment only and less risk of neutropenia means that Ryan is still able (much to his annoyance) to attend school part time for English and Maths lessons. Ryan has been entered for his Maths GCSE exam in November as we feel he is capable of achieving a C grade if he is well enough on the day.

A four month grace period of being in remission was lovely, but none of us are rested or recovered enough to be prepared for Lymphoma battle round 2. Yet here we are and fight on we will.
Email ThisBlogThis!Share to TwitterShare to FacebookShare to Pinterest
Labels: biopsy, Cancer, lymphoma, oral mass, pembrolizumab, relapse, school