On the morning of 25th October Ryan was complaining that his PEG feeding tube was really painful. He was due for a review anyway that day at Velindre Cancer Centre and a PEG specialist nurse came for a look, she said it was a bit weepy and raw, she thinks he possibly caught or pulled it in the night. She is confident it is fine and has given it another good clean.
A week on and we are back to square one. District nurse came out on Monday 31st October to advance the PEG tube as is needed each week after the first month. The nurse was unable to move the disc and caused Ryan an incredible amount of pain. We ended up having to go to the Teenage Cancer Trust ward in Cardiff, where two gastro nurses met us and spent the best part of an hour, torturing Ryan while the 'forced' the PEG to move, which they eventually did. Or so they thought.

The following week, 7th November, the district Nurse came again to the house to do the 2nd advance. This time Ryan screamed a blood-curdling scream and said "it has burst". I manged to get him into the car, to take him to TCT, Cardiff again, but had to stop on the hard shoulder of the M4 and ring the ward as he was in so much pain. They were reluctant for me to call an ambulance as we had no idea how long we would have to wait and we would have been taken to Carmarthen, not Cardiff as it was closest.

I eventually (driving at a snails pace) got him to Cardiff hospital where the Gastro surgeon met us and scans were done. It took a long time to get through the scans as Ry was in so much pain. Gas and air all the way. Which he did enjoy (small positive). Scans showed the PEG tube was no longer in his stomach, hence the pain and sickness, which is what we had guessed. Surgeons were frantically organising for him to go in to surgery in the next couple of hours, we were just waiting for Anaesthetists to come do their checks and give ok that he is well enough.

Ryan was eventually taken into emergency surgery at 9:15pm. They had discussed several options with me before I signed consent, depending what they found when they get the camera down. Hoping they would be able to perform keyhole through bellybutton. Maybe laparotomy, but hopefully not obviously. The Surgeon Mr D said it would be a least a couple of hours.

At 1:35am Tuesday 8th November, the Surgeon came to see me. They had to do a full laparotomy. The disc that holds the PEG in place had eaten away his stomach lining and had migrated out of his stomach, causing a lot of internal infection, which ultimately was peritonitis. They cleaned away the infection and inserted a different type of feeding tube a temporary one called a Malacott tube, but it can not be used for 5 days as Ryan's stomach needs time to heal and recover. The surgeon was brutally honest with me in those early hours, I had only had 1.5 hours sleep and had to process the news Mr D was giving me that he had never operated on a child with such low muscle mass and he was very doubtful that the sutures would hold. The next 48 hours where critical. Either Ryan would make it or he wouldn't.

It was confirmed Ryan needed 2 days complete rest and sedation. Those 2 days, Tuesday and Wednesday worked and Ryan defied the odds once again. On the Wednesday at ward rounds we had:

Gastro Surgeon: Happy with Ryan's progress. Blood numbers and obs are as they should be.
Dietitian: They may start with a little water on Friday to see how well his stomach tolerates, they may leave him till Saturday.
Physiotherapist: To help with moving about after Laparotomy, bed rest and sedation. This was to begin on the Friday with target of sitting on the edge of the bed.
Gastro nurse: To explain in more detail the new feeding tube and care.

The morning of Thursday 10th November was Ryan's 15th birthday and he decided to celebrate by having a small lung aspiration which meant a frantic hour while medics got mobile xray and started him on antibiotics. Once again their quick thinking and actions prevented any lung infection taking hold and although Ry had a really rough day. He was saved from a whole lot worse. 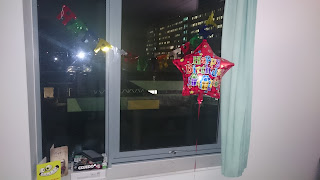 Finally after another 10 day spell in Children's Hospital for Wales Ryan was finally well enough to be ambulanced across Cardiff town to Velindre to finish RT and back to Cardiff Heath and we were ultimately discharged on Thursday 18th November for 2 weeks well deserved R&R before commencing chemo which originally should have started on 21st November.
So not content with his ultra rare lymphoma diagnosis Ryan decides to go all out and add Sepsis and Peritonitis to his collection of troubles.
It has also been confirmed that he needs to have a Hickman Line fitted as his veins are not big enough for a PICC line? That will be operation number 7.
7 comments:
Email ThisBlogThis!Share to TwitterShare to FacebookShare to Pinterest
Labels: anaesthetic, aspiration, Cancer, chemotherapy, childrens hospital, coping, gastrostomy, laparotomy, lung, nurse, PEG, peritonitis, physiotherapy, Sepsis, surgery

For some idiotic reason I thought it would be a good idea to sign up to Sober October. Macmillan have already given us such huge support since Ryan's diagnosis and I thought there is no way I can get through this without wine, but then Ryan has to battle this without, so surly I can support him without and wanted to give something back.

£375 was raised for Macmillan in two weeks which was just fantastic. I found it hard, I won't lie, but seeing this figure was all the motivation I needed.  💜💚💜

As it transpires October was to prove to be extraordinarily challenging, as Ryan battled sepsis. I am pleased to be able to say, as I type this, that Ryan has fully recovered from his Sepsis. After 10 days in the TCT unit, Cardiff of rest, fluids, antibiotics, enteral feeding, steroids and radiotherapy I can actually report that Ryan is no longer malnourished to the point that his able to eat solid food for the first time in three months and he said to me today that he doesn't need to contort his neck now to ease the pain when eating.
Unfortunately this is only a short term respite as radiotherapy side effects began to show towards the end of his third week, but we were able to arrange for Dreams and Wishes to deliver his first ever new phone to Velindre Cancer Centre which was a small positive.

In total during Sober October, I was able to raise a staggering £415 for Macmillan which was just wonderful. 💚💜💚 and I discovered also that his radiotherapy dot is in fact a real life actual tattoo. He is 14 I tell you. Can E4TattooFixers customise it do you think?